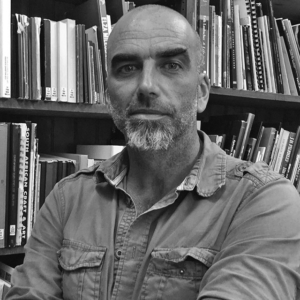 ‘When the bus went passed the District, it seemed to move with cruel slowness. Even the screeches of the gears felt exaggerated, a mechanical opera of grief. Fozia clutched her son’s hand. She did not look out the window once. Her face, usually so full of movement, had the glaze and stillness of a statue.

But Waleed looked. He tried to hold the ruin in his gaze. The bus gathered speed somewhere between the Moravian Church and the beginnings of the city centre and for a moment the earth blurred. The bricks, the dirt, the cobblestones, the untouched palm trees, the undemolished mosques merged, and for an instant, he swore he saw a Khoi man running, his feet barely touching the earth, his arms flowing mid-gesture into his bow and arrow, poised to take flight, a leather bag filled with water knocking lightly against his hip.” Nadia Davids, An Imperfect Blessing, 2014: 31.

Waleed looks out the window. The bus passes District Six. It moves “with cruel slowness”. Fozia is clenched and silent. Her face has “the glaze and stillness of a statue”, as she mourns the destruction of the District. Waleed’s response is different; he is determined to look, to register the damage. He tries “to hold the ruin in his gaze”. He sees a Khoi man running, an image from another time. The man’s gestures are flowing, his feet barely touch the ground. It is an image of grace, given to the child as a sign, or as a gift. For the duration of the image, time turns back on itself and the past is made present. To the recent destruction of the District and the contemporary landscape of ruination is added this image from a time before the city, when hunters and herders owned the land: same place, different time. We are invited, or directed, to contemplate the fate of the indigenous people of the Cape. Loss piles on loss: apartheid, forced removals, racial slavery at the Cape, the genocide of the Cape San. Such is the roll call of history. At the same time – this is one of the implications of the passage from Nadia Davids’s novel – these events are not gone and in the past. They form part of the contemporary experience of dwelling in the city, even if it takes the eyes of a child to discern them. More than this, they may hold the keys to the future; of if not the future, then a future, a different and more hopeful future. The mother is clenched, silent, lost in grief. The child – emblem of the future, repository of hope in the sign-system of the novel – is searching, curious, receptive. The Khoi man appears as a fugitive image: fleeting, fragile, “poised to take flight”.

One of the images that the discipline of archaeology gives us is the image of the city as palimpsest. That is, the idea that the city exists not only as a surface phenomenon that meets the eye, but also as a set of layers in the ground, each layer corresponding to a prior period of occupation. Dig in any historical part of the city and you will find the remains of other times, other materialities. When archaeologists excavate house foundations in the city centre it is not unusual for them to find stone tools and ostrich eggshell beads in the deepest levels. The remains of the city are arranged in their layers, or strata, like chapters in a book. What does it mean to say “like chapters in a book”? The materiality of these remains is not available for us to “read” like writing or text. Rather it demands (or asks for) a different kind of appreciation, a different kind of engagement. What is the nature of this engagement? This is not an easy question to answer, for it is at precisely this point that disciplinary languages are impoverished, or break down. Nevertheless it remains an important question, not only for archaeology but, if we follow Waleed (that is, if we follow Davids), for a future of dwelling in the city.

Scholarship is famously (or notoriously) logocentric; that is, it is focused on words, text, the idea of writing. Memory, experience, being in the world: all make the journey into narrative and into writing in order to acquire meaning. In so doing, they are shaped, edited, trimmed, captured by the formal world of signs. Victims of historical catastrophe are encouraged to tell the “story” of their loss, as a means to “catharsis” and “closure” (like the closure of a well-told tale). They externalize their pain as narrative (they shape it, they edit it, they give it form). With each re-telling the story gains life, becomes fuller, rounder. And what of the teller? Like the ancient mariner he or she is forced into an endless round of repetition. As their story fattens they seem to lose definition, to pale. The telling of the tale serves to domesticate experience, to make it available to others in a form that is readily graspable and appealing after the tastes of the times. It enters the industry of words. You could re-pave Horstley Street with Masters and Doctoral dissertations. Each one is written with total conviction that the passage to narrative history is an act of redemption. Turn this around: “history” becomes a technology of capture and consignment. History becomes the means by which we domesticate experience, capture the past, and consign it to the space between the covers of a book and the timelessness and stasis of the library. Historically speaking, the idea of the text acted as a technology of capture of space or territory. The conquistador arrived with a gun in one hand, and a book in the other. Now the idea of the text acts as a technology of capture of time. “The past” is consigned to its own time-space, safely divorced from “the present”. We “re-visit” the past through carefully staged encounters, like a relative in an old-age home. With relief we escape back into the sunshine, away from the cloying small of arrested time.

District Six exists as a landscape of ruins, mostly house foundations and the debris of occupation. To the official city archive, and the archive of memory, is added another archive, an archive of fragments. When archaeologists of the Archaeological Contracts Office excavated two adjoining houses in upper Horstley Street in 1994 and 1996, they found “shards from at least 101 ceramic vessels”. These consisted of porcelain and refined earthenwares, with a small number of “pearlware shards”. One quarter of the glassware assemblage was comprised of “bottle caps for alcoholic drinks: wine, spirits and beer”. They also found objects small enough to fall through the gaps in the floor: “a variety of small metal objects, including nails, screws, bottle tops and numerous pieces of plastic (mostly broken parts of larger items)”. The largest single category listed under “personal assemblage” was buttons, “including examples manufactured in South Africa and in England”. The team also discovered “a cut glass brooch, a silver chain, a small brooch in the shape of a key, a pendant engraved with a cow’s head and the name ‘ELSIE’ [as well as] a hair-clasp decorated with plastic flowers and a small collection of unstrung beads”. The list continues with “a bisque clay doll and several plastic dolls heads, a plastic toy soldier [and] a lead American Indian with rifle” (Hall et al. 1994: 3-8, Hall 2001).* 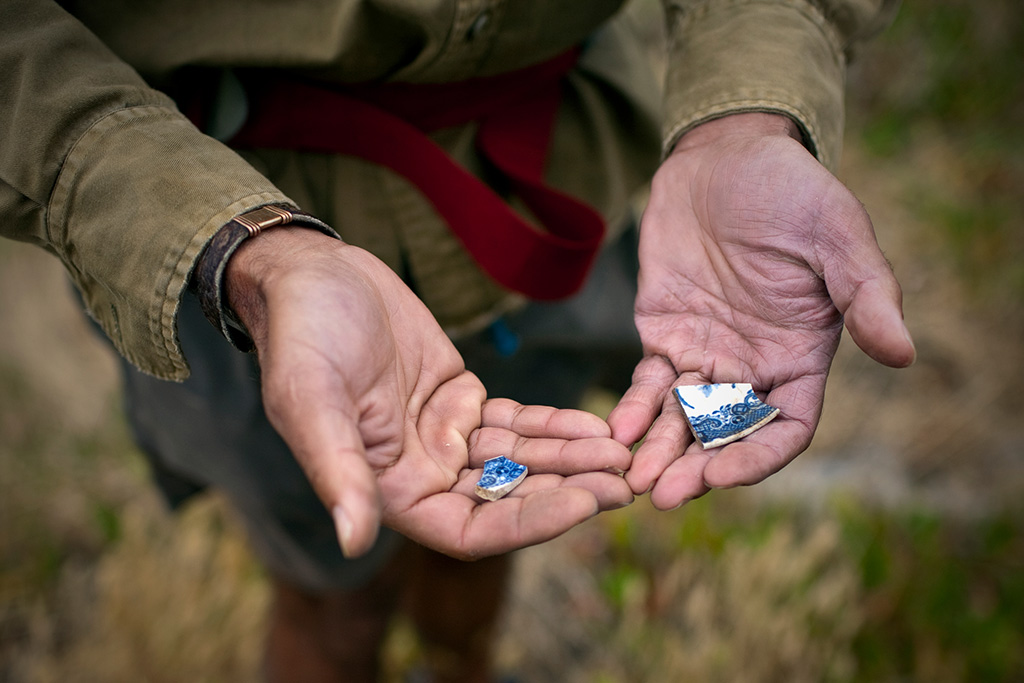 Refined white earthenware from the ruins of Redhill Village, December 2014. More than 70 families were forcibly removed from the area in the late 1960s. Photograph by Dirk-Jan Visser

Rendered as a list: a cow’s head, a toy soldier, “Elsie”, a shard of pearlware. Rendered as experience: a trowel scrapes the ground, a “lead American Indian” confronts the excavator. Rendered as narrative and as imagination: a Khoi man runs, his feet barely touch the ground. In his major work of the mid-1990s, the French poststructuralist theorist Jacques Derrida introduces the notion of the “specter”, which he describes as that which history has repressed (Derrida 1994). He develops this idea via the notion of a “hauntology” (a near-homophone to “ontology” in French), which might be loosely translated as an account of disavowed terms, absent presences, and spectral remains. For Derrida, hauntology resonates with the notion of “revenants”, the act of return, and the kind of disjunctive temporalities that are captured in the phrase “the time is out of joint”. I have come to understand Cape Town as a city haunted by the legacies of the past, and the specters of unfinished business. More than that, I have come to understand Cape Town as a city characterized by strangely disjunctive temporalities, poised between catastrophic pasts and glibly imagined futures.

Over the past two decades, Cape Town has acquired much of the paraphernalia of a world city of a certain kind: a waterfront, a convention centre, a world heritage site, a natural wonder of the world, themed shopping malls, blue-flag beaches, backpacker precincts, gated communities, safari outfits, overland adventures, poverty tourism, and a rapidly expanding study-abroad infrastructure that interfaces with colleges in the United States. In many cases, these developments are scaffolded on the blueprint of the apartheid city, so that the old and the new exist alongside, some times on top of, one another. This temporal disjuncture is expressed spatially, so that a short journey will take you from an unreconstructed apartheid township to the perfumed galleries of the Constantia Mall, or the “Victoria and Albert Waterfront”, themed to evoke the world of Queen Victoria and her consort. In these charmed spaces one encounters the past as nostalgia, and the specters are banished for as long as it takes to swipe a charge card or order a second cup of coffee. We might develop this thought by saying that in the contested public sphere of the postcolony there is a certain kind of pleasure that is premised on institutionalized forgetting. Or we might put this differently, by saying that for those who can afford it the ultimate holiday lies in taking a holiday from history.

But these holidays from history lead nowhere. In refusing to face history we are condemned, not to repeat it, but to remain entrapped by its terms. We remain blighted by the stale binaries, dead-end subjectivities, and banal iconography of apartheid. Each morning we wake up to say the same things, repeat the same arguments, and experience the same slights as we bump up against the edges of our “whiteness” and “blackness”, like victims of a cosmic Groundhog Day. Breaking the charm requires a powerful work of imagination. Waleed looks out the window. The bus passes District Six.

* My thanks to Christian Ernsten for drawing my attention to these passages.

Nick Shepherd is an Associate Professor of Archaeology and Heritage Studies at Aarhus University and an Extraordinary Professor at the University of Pretoria. He has published widely on histories of practice in African archaeology, with a particular focus on the archaeology of Cape Town. His preoccupations turn around questions of materiality, memory, representation and deep time.

Informal Movement on the Parade
Scroll to top